What Happens at Workers’ Comp Appeals Board (WCAB) Hearings?

This may come as a surprise to some, but non-attorney representatives are held to the same standards of conduct as attorneys. Even more surprising: the Workers’ Comp Appeals Board (WCAB) has a different atmosphere than other courts. But it seems that the biggest surprise to new providers is what actually happens at WCAB hearings.

Download our free Hearing Calendar Excel Template and organize your hearings by board location and date.

Some attendees believe that a WCAB hearing will feature a robed judge, a gasping peanut gallery, and dramatic twists and turns by the participating parties. The reality of a WCAB hearing is vastly different.

Here’s What to (Realistically!) Expect at a Workers’ Comp Appeals Board Hearing

A WCAB Hearing is not an episode of Law and Order.

The WCAB does have a lot more hustle and bustle than you may find in the Superior Court.  Again, it is not the big production that you find on legal drama TV shows.  In each courtroom, there is no “gallery” of onlookers. The general public can’t just go and hang out in a courtroom; there is too much liability exposure and potential HIPAA violations, as there are many documents with applicant’s personal medical information, as well as Social Security numbers and other identifying information.

Most lien representatives have a home board, meaning that there is one WCAB they are stationed at on a daily basis. (Keep in mind, there are 24 existing Workers’ Comp Appeals Boards.)  Of course, there are many others that go to various boards depending on where their employer needs them or where their big client(s) need them.  But almost without fail, on any given day, they are not appearing on one case, rather several.

This may seem like cause for concern for lien claimants, thinking that perhaps their agent has too many files and fear that their files may not get the attention that they deserve. In some cases, that may be true, but in reality, there is plenty of time to discuss any particular case or lien with defendants.

Each session, whether the morning or afternoon, is at least 3 hours long.  While a lien rep may be on several cases, most defense attorneys are only on one or two cases; however, on each of those cases, they are dealing with multiple lien claimants and their representatives.

There is a step-by-step procedure that a hearing rep follows at the Workers’ Comp Appeals Board.

The first order of business at the Workers’ Comp Appeals Board for a lien hearing representative is to make sure that you enter your appearance for any cases you have on the minutes of hearing, otherwise referred to as “signing in.”  You may have 5 cases in five different courtrooms, so it is a matter of signing in on each case and then you have to re-visit each case. At times, it seems like you are going in circles.

Next when signing in, note if the defense representative or attorney has already signed in; if so, you call out the name, give the defense your bill and demand, and then on to the next one.  Again, you just keep circling back and defendants will give you their issues, why they think nothing is owed, or make an offer.

The defendants will make you offers that you need to be prepared for.

If the offer is low, a decent lien rep will take a few minutes and take notes as to the basis for the offer and develop arguments to combat their basis; that is, if the rep actually took the time to review the file beforehand.  That is the key: the preparation.  A good rep should not be surprised by any defense argument and should also know which are valid issues and which can be overcome, which also goes back to the client’s preparation of the files prior to handing it off for litigation purposes.

The Judge is (mostly) hands-off.

While this all sounds like a madhouse and it looks like it when you are there, keep in mind, in any given courtroom, there may be 10 or more hearings on calendar at the same.  Some may be case-in-chief hearings and others may be lien hearings.  The Judge is not sitting there refereeing everybody’s discussions.  In most cases, the judge is sitting in their chambers which is just an office adjacent to the courtroom.

When the parties on a Workers’ Comp Appeals Board case have come to a close on their discussion and need to get a disposition of the case, they wait in line to go into the judge’s chambers.  They present to the judge what the resolution is or what they are requesting from the judge.  It may be as simple as they are requesting to go off-calendar (OTOC), or the need the judge to sign off on stipulations (agreements). It could be to settle a lien, or setting the matter for trial, which requires a set of documents that the judge needs to sign off on.

There are many things that the parties may want to discuss with the judge at any workers’ comp appeals board hearing, including a disagreement over points of view regarding an issue.  From there, you have the opportunity to see what the Judge’s take is on it, giving you a glimpse of how he or she may rule should you proceed to trial.

The WCAB and the Judges are there to facilitate resolution expeditiously.

If a lien claimant or a representative wants to set everything for trial, you are not gaining favor.  There is an idea that the WCAB Judges just don’t want to do trials and, in some circumstances, that may be true; however, they don’t want to do trials that aren’t needed when a resolution can be made amongst the parties.  If everyone wanted to set everything for trial, the Workers’ Comp Appeals Board court system would come to a standstill.

The Workers’ Comp Appeals Board is a smaller community than you think.

Like most industries, relationships play a big part.  Running around the WCAB, signing in on cases, and trying to locate defendants is not as daunting as it seems.  You see who the defense attorney is and there is a good chance the lien rep knows them and has appeared on cases with them previously.  So it isn’t a matter of finding them as much as just seeing them.

Even if you don’t actually talk directly to the defense attorney at first, surely, there are other liens on the file and maybe another lien rep has already talked to the attorney, so the information is shared about the defense position on the case.  This saves the attorney having to explain the same thing over and over to multiple lien claimants.

In the end, it becomes a discussion about the issues at hand and a negotiation.  Both parties need to call their clients for authority and if a resolution can’t be made, then set the matter for trial, fill out the required Pre-Trial Conference Statement, talk to the Judge, go to the calendar clerk, and get a trial date.

Well, What Happens at a WCAB Trial (And What’s the Difference)?

Trials are a whole different scenario.  This is your last chance to get something done.

Too many lien claimants aren’t prepared for trial when the trial date comes around and there is still no resolution.  That lack of preparation manifests in lack of evidence to defend your position, threat of sanctions if you go forward with such lack of evidence, and also your representative not being prepared to move forward with the trial or how to actually handle that scenario.

Organization is paramount at a lien trial; you must know your file and exhibits, mark them for the court, and know when and how to address the court and conduct examination of any witnesses.  It is still court, as informal as it may seem from the outside.  When you are in trial, consider the other cases you’re appearing on.  Be prepared.

All the lien reps know each other and most, if not all, judges realize that you may be on the record in another courtroom.  If it is going to take you the whole session and you have other cases going on at the same time, then you have to prepare yourself and have someone as your backup.  You will have breaks during the trial during which you can check in on your other cases.

Regardless of what happens at the WCAB, it still comes back to just a couple of principles:

Be prepared and be organized.  The court may seem intimidating, but if you are organized and prepared, you get more done with more efficiency, with better results, and with less stress. 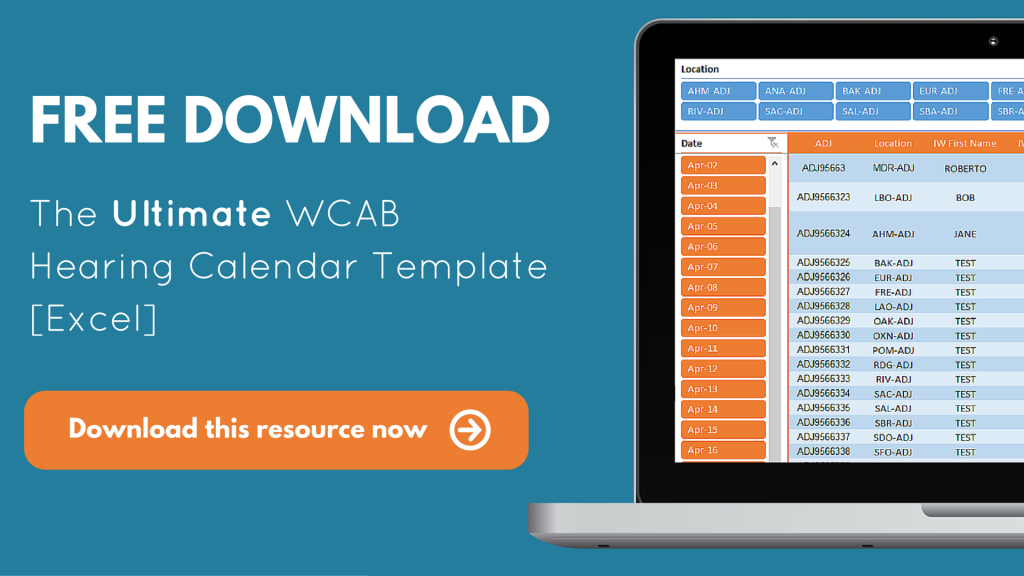 About the author Brianna